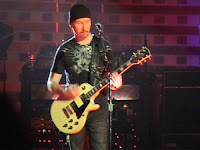 This cream colored 1975 Les Paul Custom (faded from it’s original white) found fame with The Edge as a go-to guitar for stage and studio on many of U2’s most famous recordings and performances. In 2005 The Edge partnered with Gibson and the Guitar Center Music Foundation to establish Music Rising, a charity founded to benefit musicians whose lives were torn apart by Hurricane Katrina. In 2007, he donated this prized guitar to be auctioned for the cause. The winning bid: $240,000 from Guitar Center ($288,000 including Buyers Premium).