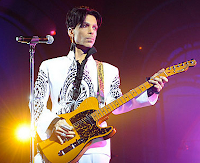 The MadCat H.S. Anderson/Hohner Telecaster, made famous by Prince who started using the guitar in the early eighties, was designed in the early 1970s and made by a Japanese factory called Morris. H.S. Anderson later sold the rights to Hohner in Germany continued to make them in Japan but with the Hohner Logo.

Hohner also supplied him with new examples during the "Purple Rain" and "Parade" tours. All of them in that translucent ocher yellow with the leopard pickguard.

Hohner guitars were a cheap alternative to Fenders. Prince fell in love with its quirky looks and honking funk tone. He has several of these guitars, most of which have had the necks replaced over the years due to the fact that he has worn them out.

The Hohner follows the basic Telecaster design: 25 ½” scale length, 2 single coil pickups and a fixed bridge. The funky sound of this guitar owes a lot to the way the body is constructed. The majority of the body, apart from a strip of walnut down the middle is maple. The front and back are made from bookmatched maple (bookmatching is the process of splitting the wood down the middle and opening it up like a book in order to achieve a symmetrical pattern on both pieces) with the maple/walnut/maple sandwich in the middle.

The guitar had fake tortoiseshell binding on the front and back and two "leopard print" plates on the front – one for the pickguard and a smaller one around the bridge pickup. A standard Fender chrome control panel with a 3-way switch, volume & tone control were also featured.