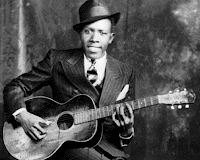 Blues legend Robert Johnson played more than one guitar during his short life. According to Johnny Shines, a contemporary of Johnson, he played whatever was available, but primarily favored the Kalamazoo, a budget line Gibson, and the Stella which sold for about $12.

In 2006 a guitar purported to be Johnson's was offered for $6 million. The guitar offered for sale was a Gibson L-1, a model made by the Nashville-based company between 1926 and 1930. It is this model that Johnson is holding in one of the two photographs that exist of him, a staged "studio portrait" (above) in which he is wearing a suit, posing with the L-1 and apparently playing an A seventh chord.

The company selling the guitar said that by comparing their guitar with the one in the picture it is clear that both guitars have the hole rings and binding, the same unbound neck and the same "dot" markers on the instruments' third, fifth, seventh, ninth, twelfth and fifteenth frets.

They described the instrument, which came with its own plywood case, as "well played and marked but structurally perfect". It had "deeply routed wear on the finger board from a great deal of use".