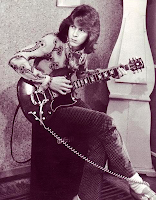 Taylor got his SG in 1968 and played it during his last year with the John Mayall band and throughout the 1969 tour with The Rolling Stones, including the "Get Yer Ya-Ya’s Out!" live album and his debut at the legendary Hyde Park concert after Brian Jones death.

"I just remember loving that guitar – I must have loved it a lot, otherwise I wouldn’t have forsaken a Les Paul to play that. I played both, but I think I preferred that SG because it had a very wide neck, and a very flat neck, and the action was absolutely superb."

"The sound was good, too. And it had a Bigsby arm on it, which I didn’t use a great deal in those days, but I like that kind of effect as well."