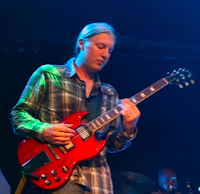 Derek Trucks of The Allman Brothers Band, the Derek Trucks Band and other projects plays a Gibson Custom Shop reissue '61 cherry SG with classic '57 humbuckers, a Vibrola cover with stopbar tailpiece and with the pick guard removed for "better tone".

Trucks plays other guitars, but is clearly a Gibson SG fan:

"Early on I loved the sound of the Gibson Les Paul, but it was just too heavy for a nine-year-old. The SG gave me a similar sound without all the weight. I also saw a picture of Duane Allman with an SG and that look has always stuck with me."