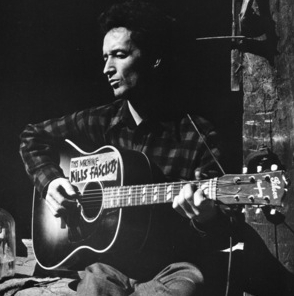 Woody Guthrie owned and played numerous acoustic guitars during his career including Slingerland, Martin and a number of Gibson models.

While on leave from the Merchant Marine in December 1943, Woody purchased his beloved Gibson Southern Jumbo in New York City.

Gibson then introduced the Southern Jumbo which was essentially a J-45 with better trim including trapezoid mother-of-pearl inlays on the fretboard.