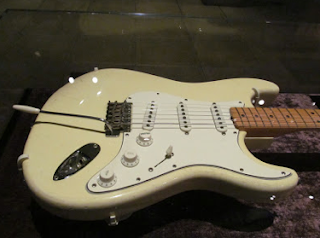 The 1968 Olympic White Strat that Hendrix played at Woodstock in 1969 was purchased new by Hendrix at Manny's Music in New York.

Hendrix gave the guitar to drummer Mitch Mitchell after his final live performance in 1970.  Mitchell held on to the Strat until 1990 when it was auctioned at Sotheby's.

The iconic Strat was subsequently sold to Microsoft's Paul Allen in 1992 and is displayed at Allen's Experience Music Project in Seattle.