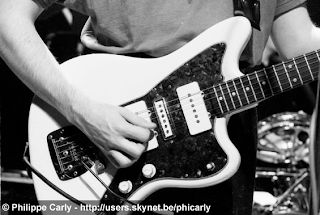 Used on many classic Cure tracks, Smith explained how he got his trademark Jazzmaster for "Guitar World" in 1996:

"It was because Elvis Costello used one. I saw him do "I Don't Want to go to Chelsea" on Top of the Pops and I said, "That's one really good looking guitar." At that stage, my knowledge of guitars was pretty basic."

"It had to be a Fender when I went out shopping. I thought of buying a Jaguar when I went to the shop, but they didn't have one; they had a Jazzmaster instead, and they gave me a price knockdown - like $150 or something. So I bought it. And that was basically my sound."

"I used a Storm overdrive pedal and Storm distortion for years as well. That was my setup through the Pornography album."

The Jazzmaster was customized with the addition of a Silvertone pickup and was eventually painted black.