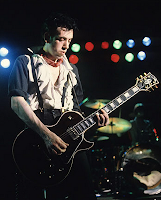 Not to be confused with the other Mick Jones of Foreigner, Mick Jones of The Clash favored Gibson Les Pauls across the range of models

Inspired by New York Dolls’ Johnny Thunders, Jones’ first guitar was a Les Paul Junior with P-90 pickups. By the time The Clash got rolling, he moved up to Les Paul Standards and Customs, while still using Juniors in the studio.

While rhythm guitarist and main singer Joe Strummer preferred Telecasters, Jones opted for a fatter sound and played a variety of Les Pauls on The Clash’s 1979 breakthrough album "London Calling".

Jones had a sunburst Les Paul Standard and an Alpine White Les Paul Custom, but is most visibly associated with a black Les Paul Custom as used in the "Train In Vain" video.