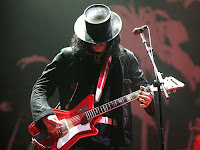 Airline Guitars were guitars made in the United States from 1958-68 by VALCO and sold through Montgomery Ward. VALCO also made National and SUPRO brands. Today they are played by bands and artists including David Bowie, The Cure, PJ Harvey, Calexico but are most commonly associated with Jack White of The White Stripes. Original Res-O-Glas models now sell for $2,000-$3,000. The guitar is named after legendary bluesman and slide guitar artist J.B. Hutto.