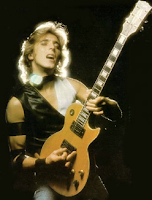 Mick Ronson had the paint removed from the front of his 1968 Black Beauty by one of Michael Chapman's roadies during the recording of "Fully Qualified Survivor". Mick thought that would make the guitar even more "edgy" than it already was.

Sometime in the 80's he gave this guitar to Hard Rock Cafe in Australia. The neck had broken so many times that it was unrepairable.

A rumor about Ronson's stripped Black Beauty is that the body of the guitar had a steel plate installed inside, which might explain the major sustain in Ronson's sound.