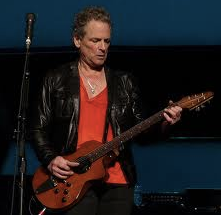 "Ever since Lindsey Buckingham took delivery of #79-003, the Model One guitar has been highly sought after for its combination of Old World aesthetics and modern, full-bodied tonal range. Played clean, it sounds incredibly acoustic and detailed. But when the volume kicks up, it screams louder and longer than any guitar you've played... without unwanted feedback or breakup."

The Model One is offered in several different configurations. The top of the line involves a specially made humbucker (so you can change the angle for different tones), a piezo pickup, and a parametric eq.

On his first two Fleetwood Mac albums, Buckingham played a Les Paul. The Turner appears first on the "Tusk" album.