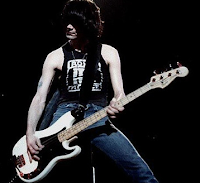 Dee Dee played many Fender Precision basses in his career. He typically went through about three a year before he quit The Ramones in 1989.

His first Precision was a mid 60's Olympic White model with a rosewood neck and tortoise-shell pickguard.

After the Ramones equipment was stolen in late 1977, Dee Dee bought several new white Precisions with maple necks. The bridge and pickup covers were removed, as was the thumb rest.