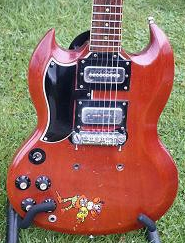 This is the original SG that was used on the majority of the original Black Sabbath albums and tours. It has been identified by Gibson as a 1965 SG Special. It has a Gibson P90 pick up in the bridge position that was fitted into a metal case by John Birch.

The neck pick up is a John Birch custom P90 type single coil. The finger board is finished with clear polyurethane.

Adorned with the cartoon monkey sticker, this guitar became the main instrument when the bridge pick up on Tony’s white Stratocaster failed after the band recorded ‘Wicked World’ on the ‘Black Sabbath’ album.

It was not, however, without its problems. Due to the thin neck profile at the heel, there were always tuning stability problems and the single coil pick ups were always susceptible to picking up interference.