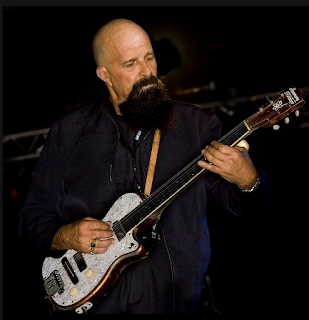 L.A. Bluesman and Canned Heat alumni Junior Watson's guitar of choice is a customized Harmony Stratotone H-44, which were in production from 1952 to 1957.  Junior's guitar is customized with an extra pickup, a tremelo tail piece and the mother of pearl top.

Harmony was owned by Sears, and also produced Silvertone models for the iconic retailer.  The company peaked in 1964-1965, selling 350,000 instruments, but low-end foreign competition led to the end of the road for Harmony in 1975.  Between 1945 and 1975, the Chicago firm had mass produced about ten million guitars.