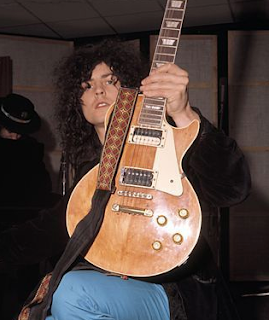 Originally a sunburst, the late fifties Les Paul that Marc Bolan of T Rex favored was refinished in an orange varnish, apparently because the color reminded him of Eddie Cochran’s Gretsch.

In 1972, on tour in America, Bolan threw the guitar across the stage in a fit of rage and the neck broke.  It was replaced by a Les Paul Custom neck.

The guitar was eventually stolen from a van in 1977, allegedly resprayed black, and auctioned to a collector in France.