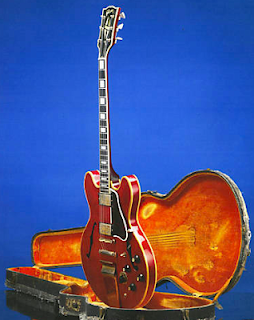 The ES355 was intended to be a deluxe version of the ES335 and featured an ebony fingerboard, pearl block inlays, gold-plated hardware, six-position Varitone and multiple binding on the body, neck and fingerboard.  The headstock was also adorned with the Les Paul Custom-style 'split-block' pearl inlay.