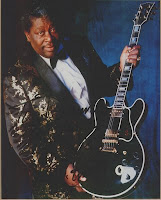 Lucille in her current form is a stereo, vari-tone Gibson ES-355. B.B. has been playing the ES-355 for at least 25 years, before that he played an ES-335. The main difference between those two guitars is that the ES-355 appears to be a solid body, due to its lack of f-holes. B.B. likes to think of the ES-355 as the "big brother" of Gibson's Les Paul. Although B.B. is partial to Gibson guitars, he has played just about any guitar he has gotten his hands on. His very first guitar was a Stella acoustic. Early in his career, he played and owned many different makes, such as Fender, Gretsch, Silverstone and of course Gibson.