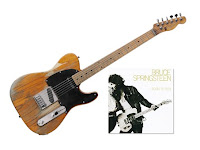 The post-factory addition of a neck pickup makes this normally single-pickup Esquire look like a two-pickup Telecaster), and its heavily worn transparent butterscotch blonde finish and black pickguard would seem to uphold that notion.

The neck, however, wears the “butterfly” string guide for the B and E strings positioned roughly in line with the A-string tuner post, which replaced the round guide that was more distant from the nut in mid-’56, along with the logo decal at the far side of this guide, a change made at the same time.

Myriad interviews also indicate that the neck has the soft-V profile that came back into fashion at Fender in late ’55 and remained largely through ’57 (early ’50-’51 necks were also V’d, or “boat necks,” but were thicker overall). All of this points at a neck made later than ’53 or ’54, although an earlier neck could have been modified to these specs.

The Esquire already has replacement tuners in the Born to Run photo, although it still wears a three-saddle ’50s or early ’60s bridge with stamped steel base plate. Some time later, it received a titanium six-saddle bridge from Petillo, along with a set of the luthier’s own patented Petillo Precision Frets, a fret wire with an inverted-V-shaped crown for precise intonation. Not so easy to detect is the fact that Petillo also added hot rewound single-coil pickups, which this Esquire retains to this day.