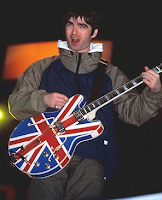 Noel Gallagher has been around the block when it comes to guitars. From his Les Paul Standard, to his red Gibson ES-335, he knows how to catch your attention. This is well-showcased with his famous Epiphone Union Jack Sheraton that was used to record many famous Oasis tracks such as Hey Now!, Stand By Me, and the famous anthem Champagne Supernova (which led to an Epiphone Supernova model.)

He used the beautiful guitar all the way to 2002, where he replaced the famous instrument for the now-famous red ES-335 which has recorded tracks like Let There Be Love, The Importance of Being Idle, and Stop Crying Your Heart Out.