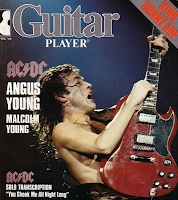 Angus Young has used Gibson SGs in various forms throughout his career.

He is rarely seen with another guitar, though he also owns Fender Telecasters, Gibson Firebirds and ES335s.