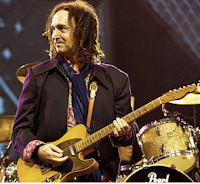 According to Mike: "The Broadcaster is real special because it's one of the first guitars I ever used. There's two or three guitars I have that, if they were gone, I'd never find anything to sound like them. (The Broadcaster) it's a 1950 or '51."

"I used it on the first two albums quite a bit. I played the guitar parts to "I Need To Know," "Hurt," "Breakdown" on it. I came up with the riff to "American Girl" on the Broadcaster."

"I still use the Broadcaster in the studio. Actually, Tom used it for rhythm parts on "Mary Jane's Last Dance." I don't want to take it on the road anymore because about 10 years ago, we were on a boat in Japan and I took it out of the case and it was soaking wet, the salt water got on it."