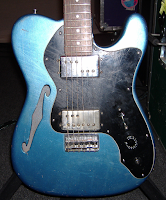 Ranaldo owned this early 1970's Telecaster Deluxe known as "F Hole" for nearly 20 years, dating back to pre-Sonic Youth days. It was his primary "screwdriver guitar" in the early 1980's until it was stolen on July 4th, 1999 in California. Surprisingly, it was returned to the band in 2005.

After it was returned, the Tele, which was originally brown, was repaired and painted blue.

Kurt Cobain borrowed this guitar to guest with Mudhoney on "The Money Will Roll Right In" during their opening set for Sonic Youth in Castaic Lake on September 26th, 1992.