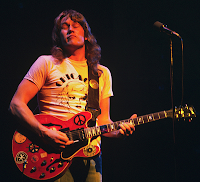 Immortalized with Ten Years After at Woodstock, Alvin Lee's sticker-covered 1959 Gibson ES-335 named "Big Red" was customized with a Stratocaster pickup and is now valued at $500,000.

"I always liked the Strat sound but when I play a Strat I find my little finger on the right hand keeps turning the volume down unintentionally. I figured that by adding a Strat back pickup to my 335 I would have the best of both worlds.""

"Working on the 335 electronics is a bit like keyhole surgery. I used to fasten guitar strings to the pots, toggle switch and jack socket before dropping them into the body and pulling them out the F holes. That way there is a good chance of getting them back in place again later."