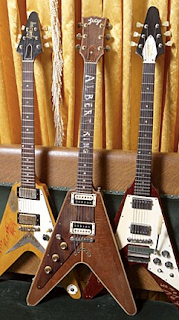 Blues legend Albert King played a number of Gibson Flying V's during his career.  Perhaps the most iconic of these was "Lucy", which was a true left handed version made for Albert by guitar repairman Dan Erlewine in 1972.

"Lucy" was made with 125 year old black walnut and based on King's original 1959 Gibson Flying V.

"Lucy" as well as two of Albert King's other Flying V's are now owned by actor Steven Seagal.