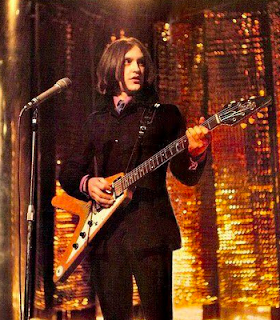 When Dave Davies of The Kinks, who is credited with inventing distortion on "You Really Got Me", flew to L.A. to do the Shindig TV show in 1964, the airline lost his guitar.

In Guitar Player in 1977, Davies said: "When we arrived in L.A. a guy said, 'Come along, I'll take you to a store, and we'll have a look around.' And they had all these guitars, but I didn't like any of them. So I looked up on the top shelf and saw this dusty old case. I said, 'What have you got there?' They got it down, and I saw what I thought was a Flying V.  I later found out that it was a Futura, which dates back to, like, '56 and had a slightly bigger body.  Three days later I was using it on Shindig. I've still got it actually - it doesn't go out of the house."

Davies was mistaken, the Gibson Futura was actually the precursor to the Gibson Explorer.