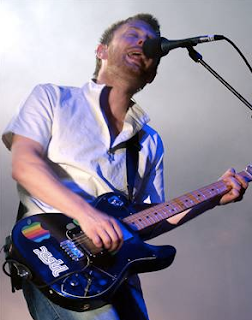 Thom Yorke got his black 1972 Telecaster Deluxe in 1996.  He removed both tone knobs and one of the volume knobs.  The tone knobs were replaced by the pickup selector and output jack, and a bridge cover from a Fender Precision bass was added.

Yorke put an X-Girl and a vintage Apple sticker on the guitar, but later covered up the Apple one for unknown reasons.