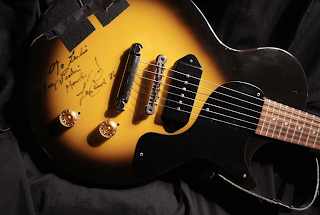 Introduced by Gibson in 1954 as a no frills student model, the Les Paul Junior roared into rock consciousness when Leslie West of Mountain picked one up.

From an interview on "The Gear Page":

“The Les Paul Junior is a tree with a pickup on it,” says West.

“I was in the studio with Felix Pappalardi and the guitar I had wouldn’t stay in tune. Felix handed me a Junior and said, ‘Play this. It’ll stay in tune.’ It did, and from then on, I was hooked on Juniors."

"I never understood why people complained that it had only one pickup. I could roll off the treble and get that nice “woman tone” out of it, or I could play it full on. It’s just a basic guitar that plays great."