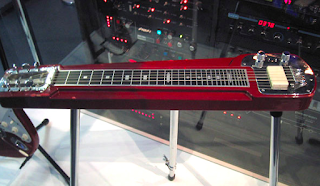 Gilmour’s slide guitars have always been a big part of Pink Floyd’s sound with different slide techniques used to create effects and soundscapes. By the mid 1970’s he used lap steels to create some of his most memorable solos.

Gilmour has used various models, but is most closely associated with Jedson, an obscure brand that were manufactured in Japan by several companies in the late 1960's and early 1970's under license from Dallas Arbiter.