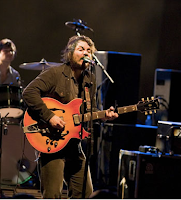 When Jeff Tweedy of Wilco was asked to name the coolest instrument in the world, he answered:

"I have it. I have a Gibson Barney Kessel guitar. It has two cutaways that look like devil horns, but it's this huge hollow-body from the Sixties. My wife bought it for me for Christmas. It's cool."

In 1961 two versions of this guitar were produced , the Custom which featured fancy bow tie inlays on the fingerboard similar to their banjos, gold plated parts, a maple neck, bound f-holes, a music note on the peghead, and a tune o matic bridge.

The Regular had a crown inlay on the headstock, a mahogany neck, unbound f-holes, parallelogram inlays on the fingerboard and Kluson tuners unlike the Custom which had Grover tuners.

The two guitars were made in cherry sunburst finishes and were equipped with 2 humbuckers.

In 1961 the Custom was not as successful as expected due to other quality guitars such as the Gibson Byrdland which listed at the same price of $599 and were considered by many as better looking guitars.