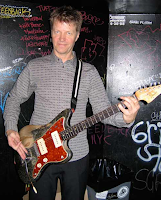 Nels Cline of Wilco on his Jazzmaster from "Downbeat":

"It was going to be a Jazzmaster or a Jaguar, whichever one I saw first, because they were still really cheap then. Because of my fixation on Television and Sonic Youth, I felt like I needed to have one of those guitars, particularly to have strings behind the bridge, to get some of those Sonic Youth effects. Because also when I finally did play one, I found the whole shape of everything, the body and the neck, the whole feel of it, extremely appealing. So, in the late ‘80s I got this Jaguar that I played on all my Trio records back then, and all the stuff with Mike Watt."

"Then I saw Joe Baiza playing this Jazzmaster one night at an old concert series I used to do on Monday Nights [at a Santa Monica club] called the Alligator Lounge. And he didn’t have his Strat, and I said, “Joe, what’s with this guitar?” And I remember thinking, Man, that’s the coolest Jazzmaster I’ve ever seen, it’s black, it just looks so great. And he said, “It’s Watt’s. He loaned it to me because my Strat’s being refitted.”

"I knew [Watt] had guitars. I had just never seen this one. So I asked him when we started touring. And he said, “Well, I don’t need this guitar. Why don’t you use it on tour, and when you’re done you’ll have some money and you can buy it from me.” So that’s the guitar, the ’59 black Jazzmaster – it was black, until I scraped all the paint off it and started trashing it – that’s my main guitar. That’s the guitar I play with Wilco, it’s the guitar I play with the Geraldine Fibbers."

"I used to think of it as my rock guitar, and I used to just throw it around. I didn’t realize when I first had it that it was going to be the best Jazzmaster that I’ve ever played. Oops. So now it’s almost destroyed."