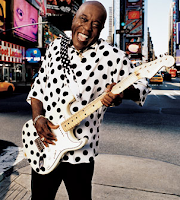 Buddy Guy's signature electric guitar is a polka dot Strat; the one he currently plays was custom made for him by Fender.

According to Guy's guitar tech Mark Messner... “He had a '57 Strat — I think he still has it — and I think they tried to make it as close to that as possible. It's just that ‘sting’ that the Strat has. That was the sound. He talks about those old days all the time: There was a Strat in a basement and that was it — that was all you needed.”

According to Buddy..."When I left Louisiana in 1957, I told my mother I was going to Chicago, gonna make a lot of money, and come back and buy her a polka dot Cadillac. Then later she had a stroke, so I never did get a chance to give her that car. Those polka dots on my guitar are for her."