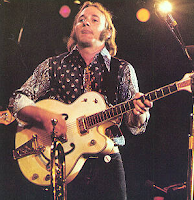 The "Cadillac of Guitars" was commercially introduced in 1955 by Gretsch, and is best known for its large size, (17" in width"), distinctive appearance, with bright white paint, gold trim, and soaring falcon engraved on the gold pickguard, which Stills removed.

The White Falcon was unveiled at the NAMM show in July 1954 being displayed as "the guitar of the future," but Gretsch initially had no plans to actually manufacture the model. It was supposed to be a showpiece, but the sheer volume of questions received about the eye-catching instrument led to a reevaluation of this position, and the White Falcon hit stores in 1955 at the cost of $600, (over $4000 by today's standards).