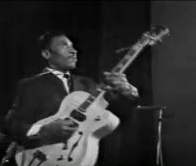 As Rolling Stone put it..."T-Bone Walker invented the guitar solo as we know it — he was the guy who figured out how to make an electric guitar cry and moan."

Introduced in 1949, the ES-5 was one of the first production models to incorporate three P90 pickups and came in sunburst and natural finishes. Gibson ended production of the ES-5 in 1955 and renamed it the ES-5 Switchmaster.